An Ancient Egyptian statue depicted as a “vital perfect work of art” has now most likely left the UK after its deal for almost £16m by a British exhibition hall to a strange private gatherer, campaigners have said.

The Government had put a fare restriction on the 4,500-year-old statue of Sekhemka, in the midst of endeavors in Egypt to crowdfund enough cash to get it. 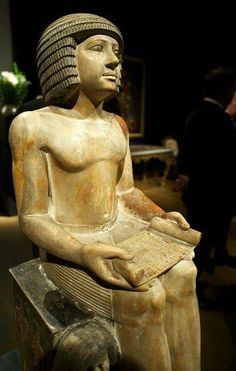 Campaigners in the UK and the Egyptian artifacts serve Mamdouh al-Damaty were shocked that the statue would never again be on open show, with Mr Damaty depicting its deal by Northampton Borough Council as “an ethical wrongdoing against world legacy”.

Following the lifting of the fare boycott, the Save Sekhemka Action Group UK said in an announcement: “It is with extraordinary trouble that we report that the statue is currently liable to have left the UK for an obscure destiny along these lines influencing our battle to work in the course of recent years and 10 months invalid.

“It is lamentable that amid this time we have discovered no official help for our battle from the immense national exhibition halls and that the unprejudiced judgment of Northampton Borough Council by Arts Council England and the Museums Association established no connection.”

It has been supposed to have been sold to either a private American or Qatari authority.

Expressions Council England has stripped Northampton Museum of its accreditation status until no less than 2019, which means it is never again qualified for a string of open awards and other financing, on the grounds that the deal broke conditions covering the transfer of notable ancient rarities.

The limestone statue, which is around 2.5ft high, indicates Sekhemka and a littler figure, thought to be his significant other, bowing adjacent to him. The copyist’s capacity to peruse and compose when not very many would have presented critical status.

Spencer Compton, the second Marquis of Northampton, procured the statue amid an outing to Egypt in around 1850, yet it was given to the exhibition hall by the family around 30 years after the fact.

The Sekhemka Action Group included: “In perspective of the disclosures from the alleged Panama Papers demonstrating the deceptive and mysterious exchange top of the line ancient pieces for charge purposes or illegal tax avoidance ample opportunity has already past that the Arts Council England, the Museums Association and the historical center world demand that the UK Government closes the privilege to secrecy in closeout rooms.

“Similarly that property proprietors should soon proclaim the advantageous proprietor, so should and should buyers of top of the line craftsmanship and ancient pieces.”

The activity assemble said it would end its crusade however wished “our Egyptian partners well in their proceeding with endeavors to look for legitimate review over the unscrupulous offer of Sekhemka”.

“At last we advance to the reputed American purchaser of Sekhemka – please loan the statue for all time to the Brooklyn Museum, New York, which is as of now taking care of a harmed statue of a comparative age and personage, all together that Sekhemka may again be in plain view subsequently satisfying a portion of the conditions set down in the fourth Marquess of Northampton’s Deed of Gift.”

A representative for Northampton Borough Council said it didn’t know where the statue was. “We don’t have the faintest thought since we sold it almost two years back, so it’s something we are not kept educated about,” she said.